A stray dog in Spain would have been born as part of a litter with her mum lovingly looking after him. Most likely these first few days will be the happiest of his life. A time for him to just feed, sleep and exist among the warm fur of his siblings and the loving care of his mum. Very soon, the dog will be taken away from his mum and labeled a hunting dog, that is, he will be asked to fulfill the sole purpose of his birth, to hunt well and make the hunter proud of himself.

Between hunting sessions he will live in a small cage among many other dogs, the food will be scarce, maybe a few pieces of dry bread every few days. The hunter will feed him this way so our dog will be driven to hunt to satisfy his constant hunger. The days will be colored in desperation and need, need for food, need for water, need for some space to run and breath. This will be a hell hole with occasional reprieves when hunting under a punishing sun.

When the hunting season is finished, if he is a lucky dog he will just be abandoned in a remote area, if he is not he may be killed straight away, but let’s be positive and imagine that this is not the destiny of our little guy. After being thrown out of a car in the middle of nowhere, his survival instinct will kick in and this dog will fight with all his strength to find food and water, often walking for days. With much effort he will come to populated areas where he can scavenge. He will be lucky if he does not get sick from eating rotten food,  but lucky he is not and many times he will be sick, he will lay down between some bushes and after much vomiting, he will get over it. He will get thin and desperate and more and more scared of humans. Nothing good has ever come from them. Most of them will tell him to go away, run after him, thrown stones and some will just ignore him.

Sooner rather than later, someone will alert the dog catcher and he will be the dog number 17 that week to be caught and taken to the pound.

There, he will be allocated to the pre-pound area, a small cage where he will spend 10 days. Will someone come for him during this time? Our dog knows that nobody will do but he has to wait anyway as this is the law. After 10 days he will be taken further into the main area of the pound, and introduced to a kennel and the other 10 dogs he will have to share it with. He will be scared, and feel very vulnerable. The dogs will test him. Will he be weak, will he be strong? One thing is certain he will be very sad. Not all is bad news, any wounds will be healed by the pound vet and food will be readily available. He will no longer have to seek it. He will be able to eat at last. This will be the first contact with humans that do not scream, chase or hit him. He will feel a tender hand on his head for the first time. He will be really scared and will think hard on ways to escape, he may growl and try to make himself big but ultimately he will give in and abandon himself to the care of the volunteers.  The days now will be different but not easier. The volunteers will look after him and he will leave the kennels for a short while every day but still a kennel is a kennel and this will be his main world for 23 and half hours a day. Lots of hours, looking at the same bowl, same walls, and same other bored dogs. Slowly the days, weeks, months will pass and our courageous dog will be waiting, for something to change not knowing very well what.

In the meantime his photo will be on a website, the Spanish Stray Dogs UK website, it will also be on the Spanish Stray Dogs UK Facebook, Twitter, and Instagram accounts. He does not know what all of this is, he does not even know he has been photographed but this is his ticket to salvation, to a better life, to the life he should have been born to, that of a loving pet. His adoption joureny has commenced.

Soon he is taken out of the kennel more often, for injections, for measurements, for rabies,  a chip will be inserted and he will jump slightly with pain. This little guy will also now exist in the form of a passport. He is no longer any dog, he now has a name, a date of birth and a little blue book that will allow him to travel further than never before.

On a sunny summer morning, he will walk slowly out of the pound for a final time, Together with other dogs, he will be placed in a van, he will look at the faces of the volunteers that loved him so much for so long with sadness and fear. He will not want to say goodbye but goodbye it is. Three more days will pass where he will mostly be on the road. In his cage, he will not see all the beautiful and diverse land he crosses through, but he will feel the hypnotic rhythm of the van on the road. And one day, under a cloudy sky he will arrive home and he will see a person that never saw before, maybe several people, a family. They will take him and his little blue book and for the first time, there will be no kennel, no hard floor, no cold. He will be shown to a bed and although scared and worried he will not be able to get his body to move any further and will lie there sleeping for hours. No noise, no barking, no half an eye open. In the morning he will go for a walk, they will talk gently to him, they will make a big fuss when he goes to the toilet outside, he will be surprised but will like it and will make a mental note to do it more often. He will think about escaping, a lot during the first few days but slowly he will get to like this new people, the food they give him, the calmness, the walks, the toys.  The days will no longer be boring and dull. Soon he will no longer tense when approached by people. On the reverse he will seek them out.  This is the beginning of the life he should have lived.  He will always be a Spanish dog but he will no longer be a stray. He will just be an adopted pet, a very adored one.  Many people will look out for him now. He does not know it but the volunteers will want to know about him, the other parents too. The neighbours will want to hear what this pup from abroad is up to.

He will never know why he got so lucky, that many people worked very hard for a wonderful future for him. He will not worry about that. He will look at his family, smile and just ask to go for a walk as if this had been a common occurrence all his life. 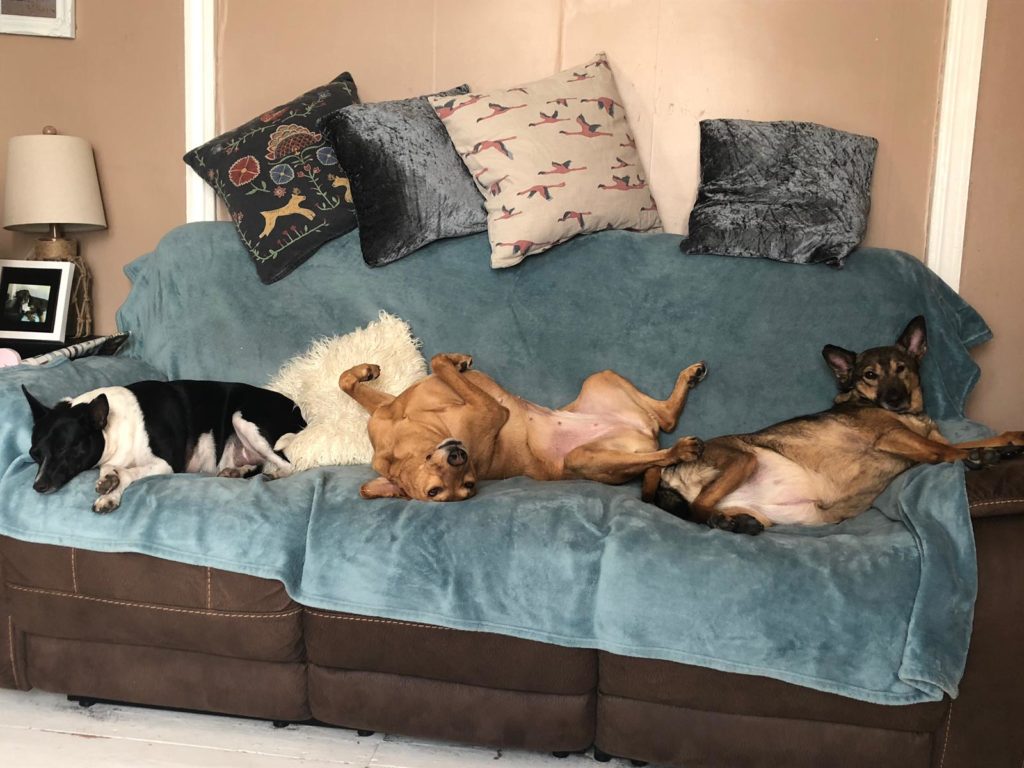