Donkeys are amazing, intelligent, social and affcetionate animals, that unfortunately suffer greatly in Greece and many parts of the world.

Donkeys, and equines in general, as seen as “objects”, even by the law. They are overworked and mistreated, and once they are not good enough anymore, they are disposed of in horrible ways.

Stratis, as he was named by his rescuers, was one of those donkeys on the Greek island of Naxos. He was found tied and lying down, in a private property, unable to stand on his legs – according to witnesses he had been lying on the ground for at least two days, which is extremely dangerous for all equines, as the weight of their body in and of itself can prevent blood flow to certain locations. Basically, lying down for days can equal death for a donkey. 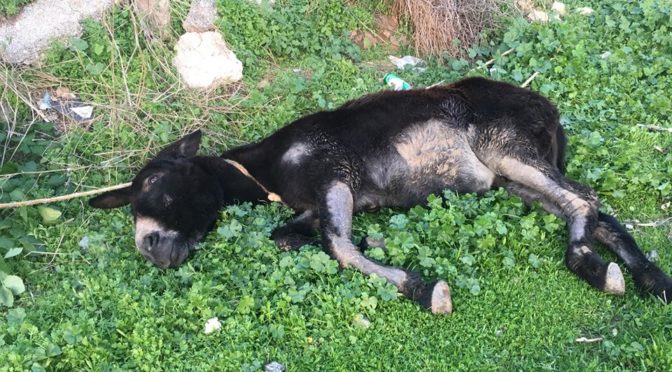 Luckily for Stratis, he was found just in time, and, with the help of a court order, he was taken to a secure place, for immediate evaluation and treatment of his condition.

Stratis was in a lot of pain, and he was put on anti inflamatories upon rescue. An xray and further tests will give a better image of the extent of his injuries and the damage done to his legs and his hooves.