What is Bear Bile Farming?

Every informed animal-lover knows how the demand for superstitious ‘medicines’ in has fuelled the poaching of tigers and rhinos. But less well-known is the equally barbaric practice of bear bile farming.

Commercial 'bear bile farming' began in China in the 1980's. It is a cruel farming system designed to extract bile from the gallbladders of living bears.

Previous to this, bears were hunted in the wild for their gallbladder bile, which is used in traditional Chinese medicine.

By the early 1990's, there were over 400 bear farms in China alone, containing tens of thousands of suffering bears. Most farmed bears are kept permanently in cages, sometimes so small that they are unable to turn around or stand on all fours. Some bears are caged as cubs and never released, with many kept caged for up to 30 years.

Most farmed bears are starved and dehydrated, and suffer from multiple diseases and malignant tumours that ultimately kill them.

On bile farms, bears are seen as mere production units, only worth the amount of bile they produce. Old or very sick bears – those who fail to produce bile – are often simply left to starve to death in their cages.

How is the bear bile extracted?

Bear's bile is extracted using various invasive techniques, all of which cause severe suffering, pain and infection.

The method claimed to be the most 'humane' by bile farmers, is 'free-drip' method, where bears undergo surgery to create a permanent open passage from their gallbladder through their abdomen.

The surgery is crude, unhygienic and rarely performed by a veterinarian. This results in many of the bears dying from infections or other complications, and agony for those who do survive.

As the body naturally tries to heal itself, each bile-tapping session involves forcing a metal tube through the wound and scar tissue to reach the bile stored in the bear's gallbladders. 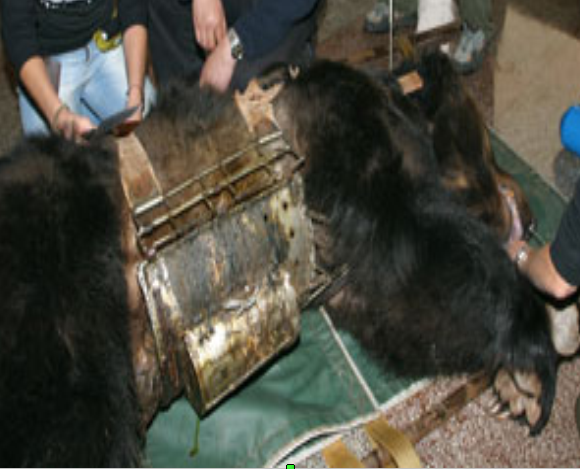 Other methods include the permanent surgical implantation of a metal or latex catheter which drains the bile straight from the bear's abdomens.

Some bears are even fitted with 'metal jackets'. Reminiscent of a medieval style torture device, it is designed to keep bile-draining catheters in place. Heavy and typically rusting, they restrain bears movement using sharp spikes and strips of metal.

Although metal jackets are against regulations in China, many bears have arrived at Animals Asia’s rescue centre in Chengdu with clear outlines and indentations which can only be caused by many years confined in a metal jacket.

In 2010, Animals Asia rescued ten bears from a farm in Shandong, many of whom had clearly had their metal jackets removed shortly before our arrival. Incredibly, Oliver, one of the bears rescued from the farm had survived three agonising decades in a full metal jacket.

In Vietnam, bears are commonly routinely drugged and jabbed in the abdomen with a four-inch needle until the gallbladder is found, so that it can be drained of its bile.

The demand for bear bile is driven by the belief that it has medicinal qualities. Bear bile use is common in traditional Chinese medicine, as well as ordinary household products and cosmetics like shampoo and toothpaste.

Sold in the form of form of powder, tonic or pills, bear bile is considered to be a 'cure' for a range of ailments from acne, hangovers, colds, sore-throats, haemorrhoids, conjunctivitis and even cancer. But it comes at a devastating price for the bears, and many never escape the torture of bear farming.

Despite the availability of inexpensive and effective herbal and synthetic alternatives, and the public health warnings of the dangers of consuming bile from sick bears, bile farming continues.

In 2015, Animals Asia worked with the Vietnamese Traditional Medicine to secure a ban on its members prescribing bear bile by 2020.

Bear Farming in China and Vietnam

Today it's estimated that more than 10,000 bears are suffering on Chinese bear bile farms and a further 1,000 in Vietnam.

In China, bear bile farming is legal, and there is almost 100 large scale farms mass harvesting bears for their bile. The largest holds over 2,000 bears. These large farms are typically owned by major pharmaceutical companies.

Another worthy bear charity is Free the Bears, which has sanctuaries in Vietnam, Cambodia and Laos.

In Cambodia the bear bile industry never managed to gain a foothold whereas in Laos there are an estimated 150 bears which remain caged in largely foreign-owned farms close to the Chinese border. Recent directives by the Laos government to strengthen wildlife protection and law enforcement, as well as consecutive years of record rescues by Free the Bears (13 bear rescues in Laos in 2018), provides hope that the industry will not develop further.

Of the three countries, it is in Vietnam that the greatest number of bears remain affected. The Vietnamese government made it illegal to take bears from the wild or extract bile from bears in 2005. However farmers were permitted to keep the bears they already had – 4,300 bears, almost all of which were suspected to be poached from the wild.

In the years since, thanks to education and behaviour change campaigns aimed at Vietnamese consumers and traditional medicine practitioners, demand for farmed bile has declined. The price has crashed and many bile farms have closed down.

It’s not all good news however. With declining incomes, farmers are drastically cutting food budgets and/or killing bears to sell into the illegal wildlife trade.

Despite the Vietnamese government not having authority to confiscate bears registered before 2006 (unless a farmer is caught extracting bile), changing attitudes and declining demand combined with a concerted push from conservationists is encouraging some farmers to give up their bears and allow the bears to live out their final years in the safety and comfort of a sanctuary.

There are an estimated 800 bears which remain caged on farms or in private households in Vietnam. A key problem preventing more rescues at this critical time, however, is the limited amount of sanctuary space available throughout Vietnam.

At Free The Bears’ new Cat Tien Bear Sanctuary (CTBS) in southern Vietnam, they are currently expanding infrastructure for the 39 rescued bears they already care for. Enclosures for our new Bear House 3 will soon be complete. The opening of Bear House 3 will finally allow these wonderful people to provide all the rescued bears with access to large, natural forest enclosures.